City Lights in SW Philly - 30 years and a compliment

For many years, John and his team had shepherded neighborhood boys and girls, teaching them carpentry and maintenance skills toward either a trades career or just being knowledgeable homeowners someday. 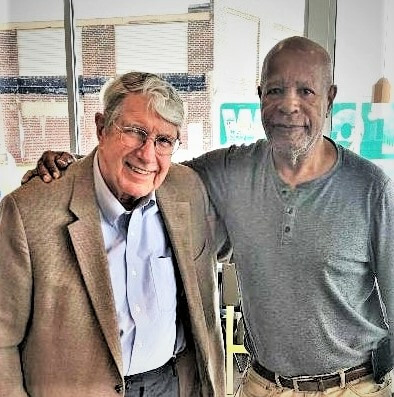 I was depositing a stack of Globe Times newspapers on the counter of the McDonald’s at Woodland Avenue and 59th Street in Southwest Philadelphia a month or so ago when someone called out my name from across the restaurant.  Part of my CityLights volunteer work has been helping out at that paper and deliveries put me in touch with people in the community (and I get free coffee).The voice calling to me came from an old Southwest friend and colleague, John McCollough, founder and director of the Philadelphia Training Group. For many years, John and his team had shepherded neighborhood boys and girls, teaching them carpentry and maintenance skills toward either a trades career or just being knowledgeable homeowners someday.Some thirty years previously a group of Wayne Presbyterian members was on the first of our long series of  “Saturday of Service” outings.  The project which fell to some of us that day was renovating Myers Recreation Center on 58th Street.I had spent the morning hours perched precariously on a ladder applying white paint to the ceiling and rolling blue paint on Myers aged walls (before the City took it over, the building was the Presbyterian Orphanage built in the 1870s).   As we were preparing to depart back to the suburbs, proud of our labors, we received a humbling comeuppance from the project supervisor, the grizzled McCollough, “We hope we see you again, of course, but the pattern has been for you mainline folk to come down here once and we never see you again!”Over the decades, John and PTG worked with CityLights on a number of construction projects.  In fact, a group of his city kids came out and spent a week helping paint the ceiling and walls in our chapel (and one of those lads eventually started his own painting business in the city).As I crossed the busy restaurant to him, these thirty years on, John smirked and said “I see you’re still here!”  It was perhaps the most gratifying compliment that I’ve ever received!