In a way, my story of growing up in Wayne Presbyterian Church (WPC) could begin six decades before I was born in Wayne on March 2, 1930. My grandfather, George Matthias Aman, and his bride, Annie Lincoln Aman, moved to Wayne in 1866. They must have become involved in WPC shortly thereafter because the 100-year history of the church notes that George M. Aman prepared the deed conveying the land donated by developer George W. Child for the new larger church building.

Grandfather Aman served Wayne Presbyterian twice as a trustee. He and Annie lived on West Wayne Avenue in a house later demolished to build the present Post Office. The location was convenient to the Church—so much so, that Mr. Aman (according to my father, George M. Aman, Jr.) assumed the duty of arriving very early on Sundays to shovel coal into the furnace to warm the building for the morning service.

My father was born in 1890 and baptized in WPC—an event recorded in church records. George Jr. was the third son in a family which ultimately grew to include six sons and one daughter. (The daughter, Mary, a lifelong member of WPC, lived with her mother on West Wayne Avenue for most of her life.) 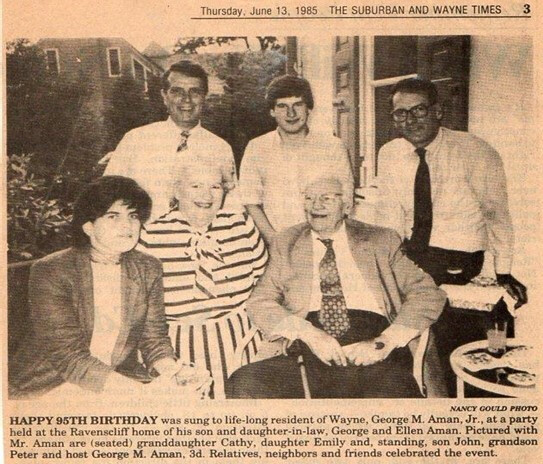 My baptism in WPC came shortly after I was born. But my earliest memory of church was sitting through the Sunday service and counting the rows of small light bulbs along the trusses of the roof that were the sole source of lighting. I also learned that the long pastoral prayer was near its end when it got to blessing the President and all the other leaders of government.

This is a photo of my mother, sister, brother and me. My siblings and I were all raised in the Wayne Presbyterian Church. The dog’s name was “Tootsie.” 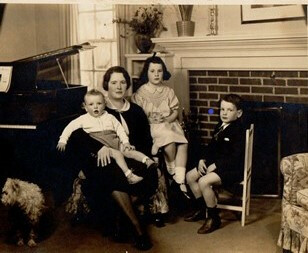 I recall puzzling over the hymns in Church, for instance not understanding why the kings would throw their crowns in the ocean (“… casting down their golden crowns around the glassy sea”). The hymn book then used by WPC contained a section called “The Psalter” which included selections from the Psalms. These were read responsively every Sunday. Another aspect of worship then was a “preparatory” service on the Thursday evening before each quarterly Sunday communion service.

Sunday school must have been more interesting than the church services to a little boy. At least the songs were more tuneful, like, “There is a green hill far away…” and “… I Come to the Garden alone, while the dew is still on the roses…”.  Sunday School was at 9:30 and the service was at 11:00. In between there was nothing like a “coffee hour,” so my friend Ted Kennedy and I jogged across Lancaster Pike (then only two lanes) to the Wack Apothecary Store for a soda (7 cents without ice cream or 15 cents with). One of our more exciting adventures during that interval was to open the door from the back of the church that led to the tower. We would climb the stairs inside the tower, the last stage being a ladder. We thought it was perfectly safe, and from the top we had a good view of the town.

The minister in the ‘30s was Dr. Charles Schall, and I don’t recall much about him except that he was friendly to kids. In that era, the customs included church members, with their children, paying Sunday afternoon calls on the minister at the manse (then located on South Wayne Avenue). My family made such a call when I was about five, and Dr. Schall gave me a brass Army insignia “US” which I treasured for years.

The custom of giving Bibles to children when they were in primary grade at Sunday School continued even during the Depression. At the appropriate age I received a leatherbound King James version, although I don’t remember a special ceremony surrounding the gift. As we moved through years of Sunday school, we always started by singing together in a vaulted assembly room (since subdivided). That was followed by lessons taught in little cubicles that were created in each floor by pulling down partitions like garage doors. The classes were separated by sexes, and the boys were taught by men. The collection was taken in baskets in each class which were then picked up by Isabella McKnight (a duty she performed for decades thereafter). We also enjoyed annual Sunday School picnics, at least one of which was held at a YMCA camp in Downingtown.

As a teenager, I was among a small group confirmed as full members of WPC at a Sunday when the senior pastor was Dr. S. Carson Wasson. I was recently reminded by Janice (Whetstone) Hill that Dr. Wasson promised when he arrived at Wayne Presbyterian that he would visit each member family once a year. Dr. Wasson also participated in one of the costume tableaux staged in 1945 to celebrate the 75th anniversary of WPC. My older sister, Emily, enjoyed posing as a Victorian era church member in one of those settings.

I attended and finally led a Sunday evening youth group called the Westminster Fellowship. We teenagers planned our own programs, with songs and discussions. I remember one time hastily arranging a program that I had been scheduled to lead, while I was being driven to the church for the meeting. The Westminster Fellowship also visited residents at the Eliza Cathcart Home, then a Presbyterian nursing home in Devon, and once each year we led a worship service in its chapel. The members of the Fellowship also joined in a few youth activities planned by the Philadelphia area Presbyterian churches. The most unusual was a week-long summer conference at Lafayette College.

A bit more on the choir: After it was revived during World War II, the Church acquired a paid quartet, and I was happy to sit next to the bass because (then as now) I was not good at reading music.

I took this picture of Harold Davenport around 1948, then a student at Princeton Seminary. He had recently graduated from Harvard. He was only here as a part-time associate, and upon graduation and ordination around 1950 he started a long career as a missionary in the Middle East. He came back to Wayne to visit and preach several times. 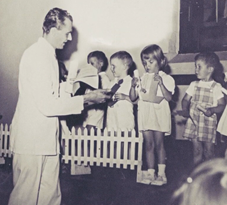 One of my most formative experiences growing up in WPC was getting to know Harold Davenport. A part-time assistant pastor, he was recruited while a first-year student at Princeton Theological Seminary by Dr. Galloway shortly after he arrived in 1948. Harold (or “Hank” as we called him) started serving on weekends at Wayne. Hank lived at the home of my Aunt Mary on West Wayne Avenue, which was convenient to my home and to the tennis courts in Wayne. Hank and I played tennis there a few times, and he gave me a copy of “The Screwtape Letters,” by C.S. Lewis.

In the summer of 1949, Hank helped plan a young adults’ retreat on a Sunday afternoon. I recall stopping at the home of one member of the Fellowship to remind her about the event. I was met at the door by her father, a retired Presbyterian minister, who told me that the family observed the Sabbath, and so she couldn’t come. Yes, times have changed. That event, or a similar one, is pictured on page 28 of the WPC 100-year history, and the picture includes Hank.

During his tenure here I took a large group picture of the Daily Vacation Bible School, which also includes Hank as a teacher. The other teachers shown include my sister Emily and Marilyn Peacock. When Hank graduated from the Seminary, a delegation from WPC attended the event. Hank left that year and spent most of his career as a missionary in Iraq and the Gulf States, but he visited and preached at WPC.

Wayne Presbyterian Summer Vacation Bible School around 1948. Who do you recognize? 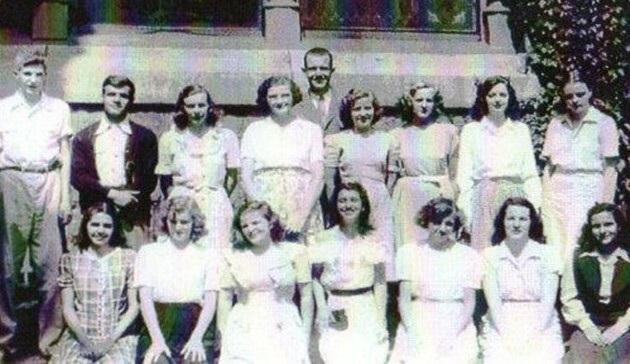 Another picture I took with the faculty of the Summer Bible School circa. 1948
(Harold Davenport at the back)

Many things have changed about WPC since the 1930s and ‘40s, just as in the town itself. For instance, during the war a member named Mrs. W.H. Sayen was still being driven to Sunday service by her chauffeur.

However, one custom continued to the present, the regular welcome by one or more designated greeters outside the back entrance to the church. The earliest I remember was Mr. Maginnis. I remember especially Felix Lockwood (shown in action in the 100-year history), Jim Rowbotham, and, of course, John Davidson. The warmth is still there.