A friend a world away inspires our Deacon Moderator

September 22, 2020 | Our Member's Stories by James Rush by Sue Metzger 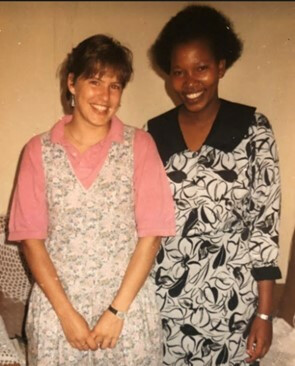 When I was 22, my boyfriend dumped me. I did the most rational thing I could think of at the time – I quit my full-time job and bought a round trip ticket to Kenya. Within a week, I had a job teaching algebra at a boarding school in Nakuru, Kenya. I was offered a bed in the matron’s house not knowing that the matron was to become my fast friend. Jane and I had nothing in common – I grew up in Wayne, she on a rural farm with no running water. I had the privilege to go to college; college was not an option for most Kenyans let alone a woman.  But in the first hours of meeting, we found out we had so much in common. We were born just months apart, had no sisters but both had several brothers, and we both were raised in the Presbyterian church.

We learned so much from each other – I learned Swahili, the different tribes of Kenya, and about dowries; Jane learned about America, that polo shirts are not just for schoolboys, and how to make and eat spaghetti. Jane showed me that grace was something that did not come from money or worldly experience. Jane took me to the market and taught me how to bargain for my fruits and vegetables. Jane showed me rural and urban Kenya. Jane took me to church services that ran for hours with lengthy, animated sermons that were translated into 2-3 languages!

Jane always introduced herself to anyone she met by saying “I am Jane, and I am a Christian.” She asked me why I did not also say the same. I told her I was not so forward with my faith. And, as was typical of Jane, she giggled and said, “You are of few words, but your actions tell me more.” Jane took it upon herself to then go around and introduce me as her mzungu (white) Christian.

After leaving Kenya, Jane and I stayed in touch for a few years, but you know how it goes - we both became consumed with jobs, marriage, kids, moving … About 12 years ago my mother called to say there was a message on her answer machine and sure enough it was Jane. Jane had immigrated to the US and was living in NJ and in the process of getting her husband and 2 daughters here. Asked how she found us, Jane said she knew we lived in Wayne and were Presbyterian. She called Wayne Presbyterian Church and was able to get my parents’ new phone number. My family and I along with the Deacon Compassion Fund helped get Jane and her family settled into an apartment. Within weeks, Jane and her husband had jobs helping care for the mentally and physically disabled. Jane and her infinite patience loved the work but also had to keep 2 full time jobs to make ends meet.

Jane was so happy here especially knowing the opportunities for her daughter. Not a conversation or visit went by without Jane always remarking on how she knew God brought me to her so she would find her home in the US. And I do believe God brought Jane into my life so I could find my community of faith.

8 years ago, this September, Jane was killed in a car accident driving between her two jobs. I was crushed and confused.  But Jane’s spirit was so evident at her memorial service. Her church community, like Jane, embraced the notion that God is great. While many were sad, everyone was comforted with love for Jane, for each other and for God. Her community of faith helped me find the good that is God.

Today Jane’s daughters Joy & Grace have graduated college as Jane had hoped they would. Yes, her daughters are so aptly named Joy and Grace - names that honor their mother’s spirit.

Listen to Jane's story as told by Sue