Wayne Presbyterian Church recently celebrated our 150th year. Learn about our history and more below!

Wayne was founded when the original church building (now called Chapel Hall) was dedicated in 1870. Located in the center of Wayne, this impressive stone structure, with a 108 foot tall steeple, was truly a focal point of what was then a very small town.  Construction began that year on a new sanctuary seating 600 persons which was completed in 1893.  This beautiful sanctuary with vaulted ceilings and stone wall which was subsequently remodeled is the primary worship space at WPC today.  Additional stained-glass windows were added over the years to compliment the two large original Tiffany-style windows.

An education wing was built in 1939.  Following renovation ($1.2MM) in 2002, it now serves as the administration area including offices for clergy and administrative staff, meeting and conference rooms and a large rehearsal facility.  A three-story Christian Education building erected in the 1960s adjoining Chapel Hall houses 33 classrooms, a reception parlor, an institutional kitchen and the church library. In 1998, through an extensive building renovation ($4.1MM), the Christian Education building and the sanctuary were joined by a light-filled and well-used Connector, adding gathering space and offices. 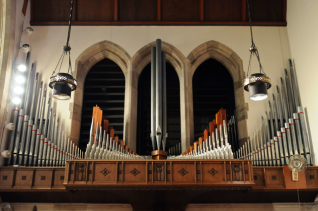